Shopping for your first drone can be a very tricky situation. Thankfully, we are here to provide some helpful tips on picking the right ones. Moreover, if you are after a budget-friendly starter drone that has useful features, then look no further.

The Hubsan X4 H107C quadcopter is what you want to get, and we will talk about why. A close cousin to the H107L, the H107C carries over the former's best features and adds new ones to make it better.

The significant difference between the two is the addition of a camera to the H107C. That's right- for an affordable price, you'll be able to own a camera drone that handles well, and that offers decent flight time.

The H107C offers a sleek design, fast and agile handling, and won’t break the bank. In this Hubsan X4 H107C review, we’ll show you what it has to offer and why you should consider buying one.

Let’s start this review on the contents of the H107C package. When you purchase the unit, here is what to get aside from the actual quadcopter:

-A 3.7v 350 mAh battery to power up the unit. Minimal installation is needed to get the battery mounted on the unit.

-A 2.4 GHz transmitter to pilot your mini flyer. 4 AA batteries make the transmitter work, which you have to get separately as it is not included on the package.

-A propeller guard to protect the drone’s propellers. Like the battery, minimal installation is needed to get the prop guards attached to the unit.

-Four spare propellers to replace any damaged propeller. Chases will happen a lot, especially for those who are still learning how to fly. Having additional props will help in this regard.

-A propeller removal tool is also included on the package. This will make removing the propellers for replacement, or placing the prop guards, a comfortable and safe task.

-A USB charger to charge the battery once drained. You can use it with a power back, a phone charger, a car charger, or your laptop or computer.

-Lastly, the package includes an easy to read manual to give you what you need to know about the product.

So that's what we get out of the box. Now, let's now focus our attention to the star of the show:  the Hubsan X4 H107C. In this section, we will talk about the aesthetics, as well as the performance, of this fantastic unit. 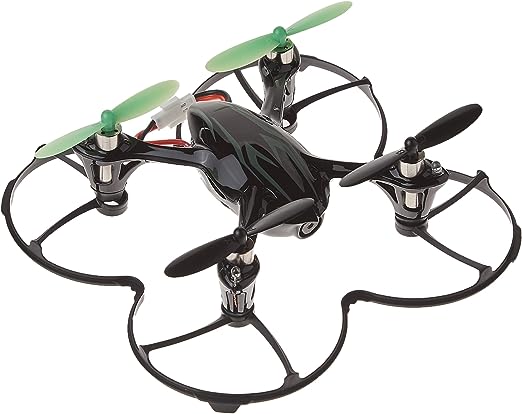 We’ll start with everyone’s favorite feature of the unit - the camera. It’s difficult to believe that you can fit a quality camera inside such a small drone.

The 2 MP camera records in 1280 x 720 HD resolution. It also has an SD card slot so that you can register and watch footage on your computer.

Once you finish your flight, remove the microSD card that comes with the unit and connect it to your laptop or computer. Then you can share the video on social media or via email!

The footage includes audio as well so you'll be able to pick up on any surrounding sounds while recording. However, just like any quadcopter, you'll mostly hear the buzzing of your propellers!

To be clear, you won't have access to the recording power of something similar to the DJI Phantom 3. However, basing from the unit's price point, the H107C is doing a great job.

This RC quadcopter measures approximately 1 inch tall by 3 inches wide. It isn't very big and could be considered a mini-drone. If you recall, the X4 H107L weighs only about 28 grams without the battery attached.

Well, the X4 H107C is a little heavier, weighing in at about 40 grams without the battery. This extra weight is due to the addition of the camera, mostly. However, the added weight does not hinder the unit's movement, so still expect a quick and agile quadcopter.

To assist the beginning flyer in flying the X4 H107C, Hubsan added LED lights on each propeller side.  It is color-coded and helps determine where the unit is facing. Our only nitpick is that the LED lights could have been placed on the side or the bottom of the motors for better visibility.

From an aesthetic standpoint, the Hubsan X4 H107C looks pretty cool! It comes in two different color schemes: Black and Green, and Black and Red. If you intend to use this outdoors, we recommend the Black and Red variant as it is easier to locate when it crashes on the grass.

Looking under the hood, so to speak, we would see that four coreless motors power the unit. It uses the latest 6-axis gyro technology, which assures that the X4 H107C will stay stable whether flying or merely hovering.

Moving over to the product’s durability, the Hubsan X4 H107C is, in two simple words, very sturdy. It can take several crashes relatively well.

The included propeller guard, once attached, will give your unit a longer life. The prop guard is flexible and durable, able to absorb impact when crashing. If you're shopping for your kid, this is a great model to consider. 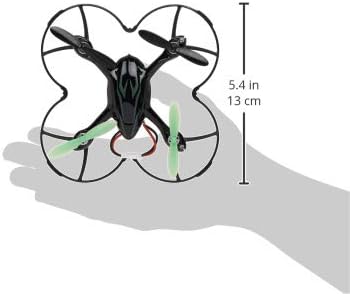 The most significant selling point of the X4 H107C is its fast and agile flight. Like its cousin the H107L or H107D, this model will zip effortlessly through the air. The controls are very responsive, and the thrust is relatively robust.

Additionally, you can also fly the H107C indoors. Due to its lightweight design and small size, you can operate inside without having to worry about causing any significant damage. That's the beauty behind smaller models like the H107C. You wouldn't, for example, be able to fly the DJI Phantom 3 inside. It's just too big, bulky, and heavy.

Flying outside is a different story, however. While you can play with this quadcopter outdoors, be mindful of how strong the winds are. The unit struggles with fighting strong winds can carry the unit away.  Moreover, due to it being smaller than most outdoor drones, locating it after crashing may be difficult.

The H107C has several flight modes that can be toggled via the transmitter. First-time flyers can start at the beginner mode that lets you focus more one control and keeps the unit on cruise speed. Once you are comfortable with the controls, you can move through the flight modes up to the expert mode, where speed is the name of the game.

As for flight duration, the unit can fly from 7-10 minutes on a single charge. Though that is only for pure flying, as doing tricks, flips and recording can make that flight time shorter. The battery takes around 40 minutes to charge fully, so we recommend getting spare batteries so you can enjoy more flight time.

Next, in this Hubsan X4 H107C review, we're going to talk about the drone's transmitter. The controller is fairly standard:

it runs on four channel frequencies, and it comes with an LCD, power buttons, recording buttons, and buttons to change your flight mode.

We love the fact that the transmitter’s LCD shows your approximate throttle position (in the form of a %). This comes in handy as it allows you to gauge how much throttle you need to reach certain heights.

Design-wise, we love how the transmitter looks like a something from a modern video game console. It is very ergonomic, comfortable for small hands or big hands. It is also sturdy and does not have that cheap plastic feel.

As for performance, it responds very well. The control sticks are neither too stiff nor too loose, and the buttons are well placed. With an operating range of around 50 meters, it allows for significant flight distance.

As mentioned earlier, the transmitter runs on 4 AA batteries that are not included upon purchase.

As with most drones in the market, there are things that we love about it, as well as some that we wish it had more of. In this section of the Hubsan X4 H107C review, we will talk about just that.

If you’re looking to capture decent aerial footage at an affordable price, then get the Hubsan X4 H107C. It’s one of the first quadcopters people get when learning how to fly drones.

There are few other models, if any, which offer recording capabilities and agile flying for such an affordable price, like the ones we featured. If you're trying to get the lowest possible price for this drone, click on the big orange button below. Good luck and fly safely.